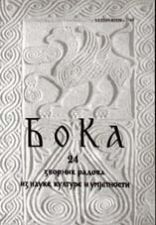 Publishing of the Magazine started in 1969 and 35 issues have been published so far. In the first issue the Editorial Board elaborated the concept of the Journal.

Boka Kotorska, as a geographical destination, due to several phenomena determining it, provides to today's science an inexhaustible source for observation and study in different areas of scientific fields and disciplines. Inhabited from the earliest time, it has, as a geographical territory, become the arena where civilizations and cultural eras changed and provided for the science, as much as preserved from the ravages of time, outstanding opportunities to confirm their findings, as well as to raise the veil of mystery from some of them. Keeping abreast with ever increasing modern technology and methods, its research and importance will continue to grow.

For the said reason, as well as the other one – to prove that the Bay of Kotor is not only a jewel of tourism due to its natural beauty, but also because of its rich cultural heritage - the employees of the Regional Museum of Herceg Novi found it necessary to start this edition, in order to provide an opportunity to the uninformed ones to get to know the Bay of Kotor in a more comprehensive manner, whilst encouraging scientists to cooperation, exchange of opinions and polemics.

The concept of the magazine, interdisciplinary research and study of the Bay of Kotor topics in the past and the present, promoted in the first issue of the Journal, did not change, except for technical interventions in terms of better quality of print, colour illustrations and uniformity of represented works including: UDC number, keywords, summary in English and appropriate scientific apparatus.

The Journal includes over 500 scientific and expert papers on more than 7,000 pages of text, written in cooperation of more than 160 authors. The quality of the published papers is confirmed by numerous bibliographies and citations, of the researchers of the Bay of Kotor. The region of the Bay of Kotor has been multidisciplinary investigated, and therefore, the Journal fully meets the established requirements and has become an indispensable source of information for every researcher of the Bay of Kotor.

"It has for a long time been providing researchers with an insight into such an opulent corpus of expertly treated scientific topics, that it often serves as a worthy substitute for a comprehensive unwritten history of the Bay of Kotor. Once such is written, it will be impossible without a study of the material set between the „Boka's characteristic covers."  (Vladimir P. Roganović, Literary, cultural and historical background in the Boka Journal)

The Journal got fully asserted, thanks to digitization of all so far published issues, which was done in the Public City Library of Herceg Novi. On the Library web site „Boka“ is available to all interested users in full text, including each latest issue soon after its publication in printed format.